The people have spoken, and the site that earned the most votes in our Voter’s Choice contest is Mortgage Las Vegas Nevada. 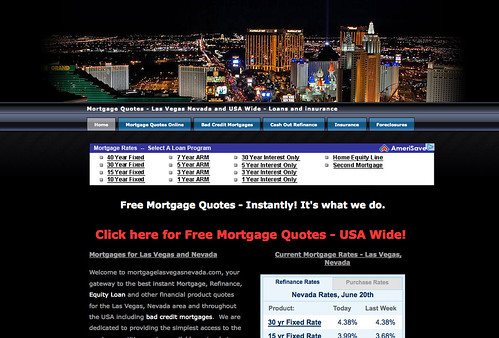 Congratulations to Brian Kragner, the creator of this highly functional Yola site. “Yola has been instrumental in my online success,” says Brian. “I had no idea where to start, and I had a real shoestring budget. With Yola’s help I’ve been able to persevere, and ride out the learning curve.”

Brian considers Yola’s most beneficial feature to be the easy user interface.  “The simple but effective click-and-drag interface is intuitive yet allows for all the customization needed to have my site perform well in the sea of copy-cats out there.”

He’s also a fan of the preview changes feature. “Some of Yola’s competitors don’t have this, and it’s really great, both as a time saver and in terms of ensuring quality before going live – you only get one shot at a first impression!”

We’re impressed with the way Brian has maximized his site’s SEO. “My site ranks in the top five of Google for some great but very competitive terms,” he tells us.

Thanks for choosing Yola, Brian. And thanks to all the fans who participated in the Voter’s Choice Award.

Site of the Week: Jay and Marissa